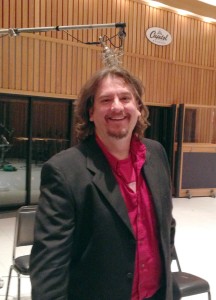 David Glen Russell originally wanted to be Randy Rhoads or Eddie Van Halen, shredding on the guitar to millions of adoring fans. In pursuit of this, he promptly entered the Classical Guitar program at Virginia Commonwealth University. Even though he was a guitar major, he always had an interest in composition. During a viewing of Tim Burton’s Batman, Russell was captivated by Danny Elfman’s dynamic score. That was when he fully realized the mutualistic symbiosis which can be forged between film and music. The die was cast and he determined the specific path he wished to pursue as his life’s work. After graduation from VCU, Russell continued his education at University of Miami, receiving a Master of Music in Media Writing and Production. Wishing to pursue composition for film and other mass media genres, with a concentration on sweeping orchestral works in the vein of the masters, but revolutionized for modern cinema, he moved to Los Angeles. David immediately became involved in many different areas of film composition, assisting John Frizzell as orchestrator on The Rich Man’s Wife and The Empty Mirror, which premiered at the 1996 Cannes Film Festival. During his tenure with composer Shirley Walker, Russell worked as a sequencer programmer on the film, Turbulence, and served as an orchestrator on Superman: the Animated series.  David had the opportunity to work with Chris Young as a synthesist on Spider-Man 3 and several other films. During this time, Russell became increasingly involved with work in horror films, notably Ghost Rider, Drag Me To Hell, The Grudge 1 and 2, and The Uninvited. In this genre, Russell developed a capacity for emotive, ambient music which invoked intense trepidation while maintaining musical integrity. He also contributed additional music to the films Untraceable, Love Happens, and The Uninvited.

An award-winning composer on his own, Russell scored the historical features Wicked Spring and No Retreat from Destiny, along with the NBC Special Farrah’s Story and the series Chasing Farrah and Roger Corman’s Black Scorpion. In the Oscar-nominated film, Black Swan, Russell created the recordings that were used during shooting for composer Clint Mansell. David orchestrated composer Michael Brook’s beautiful score for the film Brooklyn. The film was honored with an Academy Award nomination for Best Picture in 2016. He once again worked with Brook, orchestrating his score for the feature Stronger starring Jake Gyllenhaal.

Most recently, David has been spending time in the Star Wars universe, working with Kevin Kiner providing additional music for the animated Star Wars series, Star Wars: The Clone Wars, and Star Wars Rebels. Considering that the score of Star Wars: A New Hope, was the first album Russell ever owned, he is thrilled and humbled to be alongside John Williams as one of a select few who have contributed over 11 hours of music to the Star Wars canon. David has received acclaim for his work in this echelon, particularly for intense action such as battle and chase scenes.

While he excels in sweeping, dynamic works, his love of more pensive and delicate music is evident in many of his original scores. David feels that the powerful nature of music, while transformative to film, can maintain a classical orchestral feel, whether utilized in a video game, a horror film, action animation, or a historical drama.

And it is true, Spider-Man really did save his life…